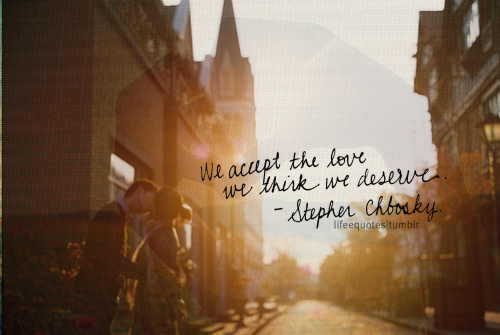 Think on that. Let it sink in, roll it around on your tongue a bit.

I read that quote on fetlife today. And it was another epiphany moment.

Epiphany #1 – I have daddy issues. Thanks to wholelottarosiee and her post about identifying her daddy issues .. I had a light-bulb moment of epic proportions.

You see, unlike her father, mine has been absent. He left when I was aged 5. I never saw him again. Until I got a call when I was in my mid 20’s from my mother telling me that he’d had a heart attack walking down the street. Cue my confusion and my answer of “Oh. Right. Ok. Do I need to do anything since I’m his offspring?” and “Mum, are you ok? He wasn’t more than a sperm donor for me, but he was your partner once upon a time…”

Was I meant to be upset about this? Sad? Crying? Euphoric? What was the suitable response for someone I didn’t remember and who wasn’t in my life for the important things? Like hiding my first ever girlfriend from my mother because she thought I was straight? Mum finding a bong in my room when I was age 15? Let’s not forget the totally embarrassing find that she had when I was 20 and she found a bagful of whips, cuffs, gags and leather blindfolds hidden in my cupboard….

So who was this man and what kind reaction was “acceptable” for me to have in this situation? He has always been a non entity to me. The silhouette that’s always there but you forget about. Did he really mean this much to me?

I’ve been flippant to the point of not even giving weight to his existence for a long time now. I mean, why would I give energy when none was given to me when I needed it? This man who helped create us but disappeared into the ether like we didn’t matter to him. Why should he matter to me after all?

Apparently it does matter.

Daddy issues. I has them.

It matters because now I seem to come at men that are emotionally distant. I have relationships with men that are unattainable, because of my ingrained belief that they will all leave me at the end of the day. Because if my father couldn’t stay, then why the heck would anyone else? So cue a long line of men that were into me, but all slightly aloof. There were bits of them that they weren’t willing to give, to open up … I was the most alone in some relationships than I had been when I was single.

Madonna, such a wonderful woman. Wish she’d grow old gracefully. But that’s beside the point, the point she makes is 100% valid and so true.

Did he love me? Ever? Possibly. Apparently my father stayed away from us because he thought it was in our best interests that he wasn’t around. How he came to this conclusion I have no idea. But there you have it. That’s what his side of the family keep telling me. Was this meant to make me feel better? Am I meant to forgive him now? Because he had my best interests at heart apparently? I felt awkward and out-of-place at his funeral. Everyone was crying for this person that they knew and loved. I sat there dry-eyed and vacant. Empty. Because that’s what I felt when I thought of him.

So then, how do I let go? How to do I acknowledge this man, that helped sire me, yet disappeared not long after that? How do I get past this and hopefully move onto relationships where men actually want me instead of thinking they want me in the beginning and disappearing?

I don’t know the answer to this. I honestly don’t. Maybe it’s enough that I’m now consciously aware of it. That if anything, the little red flags that usually come up and I ignore and go for it anyway will now stop me in my tracks and I’ll say no thank you instead. Time will tell.

Stemming from this, the quote at the top of this post links into everything.

We accept the love we think we deserve.

Oh I have a life!

Some things that make me happy

The beginnings of something different – Part 2